“Whether you’re interested in a quick snapshot of the market or in obtaining a greater understanding of some of the policy issues that impact housing affordability (along with possible solutions), I am confident that this report will provide you with valuable information and insight.”


Housing affordability, and affordable home ownership in particular, is a growing concern. Housing prices in 2016 rose across all home types in the Greater Toronto Area as the supply of listings remain constrained.


Executive Summary - FROM TREB- The Toronto Real Estate Board 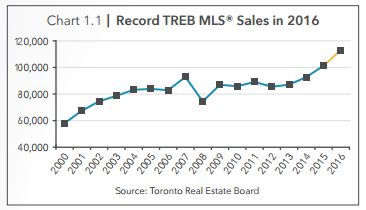 It’s important to note that record home sales in 2016 were heavily based on domestic demand. Foreign buying activity in the GTA represented a minimal 4.9 per cent of transactions. In fact, the great majority of foreign buyers were purchasing a primary residence, a property to rent out, or a property for another family member to live in. 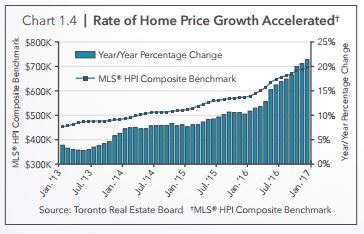 When demand is up and supply is down, prices generally rise, and the 2016 GTA housing market was no exception.

Strong rates of price growth and a short supply of listings will continue to make headlines in 2017. TREB MLS® System sales are expected to range between 104,500 and 115,500, with a point forecast of 110,000 (Chart 2.1). The results of a TREB-commissioned Ipsos survey on intending buyers found less respondents planning to purchase a home in 2017 than compared to the previous year (Chart 2.3) 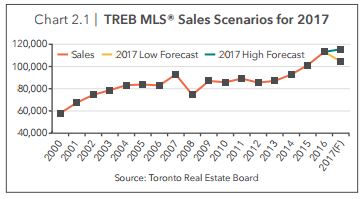 Despite the possibility of a decline in sales, first-time buyers will continue to account for more than half of the home sales in the GTA. Strong first-time buyer activity points to confidence in home ownership as a quality investment. A likely range for the average selling price in 2017 is between $800,000 and $850,000, with a point forecast of $825,000. This suggests an approximate calendar year growth rate ranging between 10 per cent and 16 per cent.

1.1 | 2016 MARKET RECAP In TREB’s inaugural Market Year in Review & Outlook Report released in January 2016, we predicted that the 2016 GTA housing market would produce a second consecutive year of record sales through TREB’s MLS® System or the second best sales year on record. The former turned out to be the case, with 113,133 transactions reported by REALTORS® working within TREB’s market area, representing an 11.8 per cent increase compared to 2015 (Chart 1.1).

According to a TREB-commissioned Ipsos survey of existing homeowners undertaken in November 2016, slightly more than half of households who purchased a home during the preceding 12 months (recent home buyers) were first-time buyers (Chart 1.2). Looking at all homeowners (all households who have owned one or more homes), the average survey respondent had owned two homes, including the one in which they were currently living. A detailed profile of recent home buyers is provided in Section 1.2. 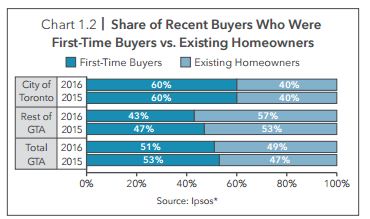 From a separate Ipsos survey of TREB Members, it was estimated that only 4.9 per cent of transactions where a TREB Member acted as a buyer’s representative involved a foreign buyer. The survey also found that the recent foreign buyers tax imposed in British Columbia’s Greater Vancouver Regional District had resulted in minimal inquiries from foreign buyers hoping to purchase of a home in the GTA. These results, suggest that the record home sales in 2016 were based heavily on domestic demand. Key drivers of the continued year-over-year growth in home sales included regional population growth, low mortgage rates, low unemployment, and above-inflation income growth. 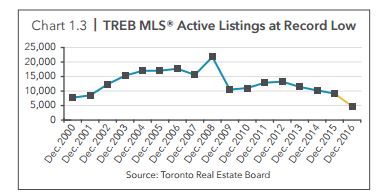 Despite very strong gains in home prices, we did not see homeowners listing their homes for sale to take advantage of equity gains. Instead, the opposite occured with new listings reported by Realtors declining in 2016. For example, in December 2016, active listings were at the lowest point since the turn of the millennium (Chart 1.3). The steady decline in available listings over the past few years has been exacerbated by a vicious circle, wherein existing homeowners, who would have otherwise chosen to list their home for sale, chose instead to stay put and perhaps renovate. Renovation spending continued to trend upwards in 2016, with 40 per cent of nonrecent home buyers planning on spending more than $50,000 on renovations - up substantially from 23 per cent a year earlier.

The rules of economics dictate that when demand is up and supply is down for a given good or service, price generally rises, and the 2016 GTA housing market was no exception. Record demand up against an extremely constrained listing supply meant competition between buyers was very strong in many GTA neighbourhoods for most, if not all, home types.

Regardless of the measure considered, double-digit annual price increases were experienced across the region. The MLS® Home Price Index (HPI) Composite Benchmark was up by double digits on an annual basis throughout 2016 (Chart 1.4). The average selling price for 2016, at $729,922, was up by 17.3 per cent year over year compared to $622,121 in 2015. 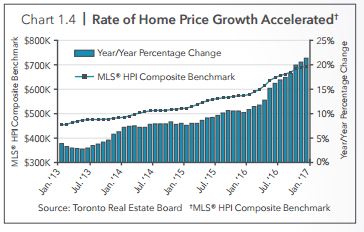 Low-rise home types, including detached and semidetached houses and townhouses, generally led price growth. The annual growth rates for both the MLS® HPI and the average selling price for detached houses were above 20 per cent for many months in 2016. However, double-digit rates of price growth were not limited to ground-oriented housing. The condominium apartment market segment became tighter throughout 2016 with more competition between buyers for available listings. This resulted in an acceleration of price growth in this market segment as well. In December 2016, the MLS® HPI Apartment Index was up by 15.2 per cent year over year. 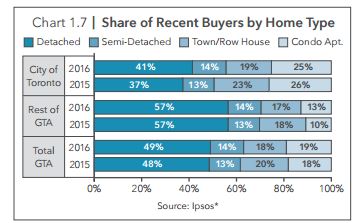 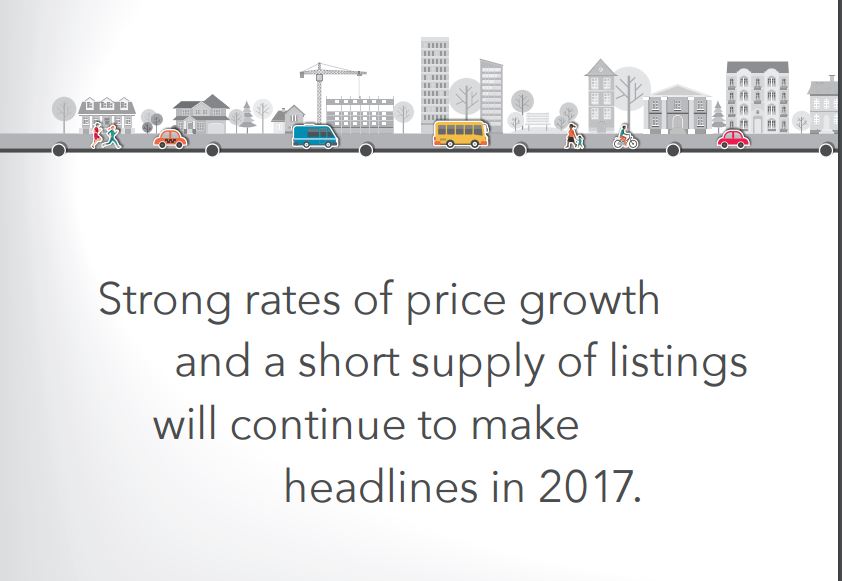 To continue searching, you must agree to the Terms of Use.

For the best experience, please provide your cell phone number and select accept below to opt-in to our Terms & Conditions and Privacy Policy to begin receiving text and voice communications.

or make a new notebook

The Toronto MLS® requires registration to view all homes currently for sale.
(Prices and inventory current as of January 28, 2023)

Verify the value of your home,
maximize your investment and see local market activity.

We just need your phone number to finish creating your account.